Classical Chinese from the neijing

"Classical Chinese" is the language (technically writing system, as opposed to spoken language) with which Chinese medicine's foundational texts were written, such as the Nèijīng and Treatise on Cold Damage (Shānghán Lùn). This writing system, as well as the associated spoken language, "Old Chinese", are distinct from modern Chinese. Though related, the ability to read modern Chinese does not confer the ability to read Classical Chinese. To read the classics, one must learn Classical Chinese.

The most direct and practical means to studying the classics, then, is under the guidance of someone with formal training in Classical Chinese. Dr. Aguilar has been studying the Chinese language since roughly 2010. He began his formal language training at the University of Washington, Department of Asian Languages and Literature, in 2013. He has been studying Classical Chinese at the UW since 2016 and is currently a graduate student studying under expert philologist Professor William Boltz.

This lecture series begins with a close reading of chapter five of the Nèijīng. This chapter is crucial, essential to Chinese medicine and the contemporary "Traditional Chinese Medicine" (TCM). The listener will learn the contents of this chapter while slowly developing their own ability to engage the classics directly themselves.

We will be using as our primary text the translation recently published by scholar, professor, and translator Sabine Wilms, PhD: Humming with Elephants: The Great Treatise on the Resonant Manifestations of Yin and Yang ($53). The listener will need to purchase this text.

It is highly recommended the listener also download the smartphone app Pleco and purchase the "Basic Bundle", as well as the two dictionaries: A Practical Dictionary of Chinese Medicine and A Student's Dictionary of Classical and Medieval Chinese.

The first series is a set of eight, one-hour lectures. They are available beginning July 13th, 2020. The cost is $110. You pay for and access the lectures via my podcast.

Throughout the series I will mention primary and secondary sources. Below is a comprehensive list for you reference:

Wilms, S. Humming with Elephants: The Great Treatise on the Resonant Manifestations of Yin and Yang (A Translation and Discussion of Chapter Five of the Yellow Emperor’s Inner Classic Plain Questions). Whidbey Island: Happy Goat Production, 2018. 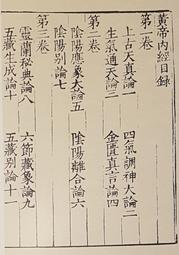